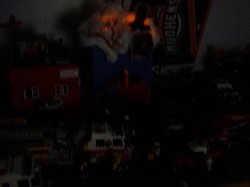 At approximately 9:38 PM a 1st alarm was toned for a 3 story building fire. Ladder 2, Snorkel 1A, Engine 2, and Chief 1 were dispatched. When ladder 2 arrived on scene, they found heavy smoke and fire coming out of the 3rd floor windows. Ladder 2 sent a 2 man crew up to floor 2 to begin a primary search, the other crew of 2 was sent to the roof of the neighboring building. A minute later, E-2 and S-1A arrived, E-2's crew initiated a secondary search of the 2nd floor as L-2 worked 3. Ladder 2's crew found 1 victim on 3 and started working it's way down. As they were doing so the 3rd floor collapsed. Ladder 2's crew was able to evac' the building through the 2nd floor fire escape. The victim perished due to smoke inhalation, and 1 fire fighter was injured due to falling debris when the 3rd floor collapsed. Following this incident at approximately 6:08 AM, engine 2 and Ladder 2 were dispatched to the same building for a car    fire. No one was injured in this incident. 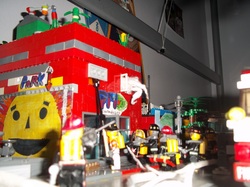 At approximately 02:30 hours, dispatch received an automatic alarm, and multiple calls of a building on fire. Engine 4, squad engine 2, ladder 2, ambulance 2, and Tac 2 were sent to the scene. Upon arrival, crews found smoke showing out of a 2nd story window. Ladder 2's crew began to ventilate as engine 2's crew started to make its way into the building. The fire was extinguished at approximately 04:00 hours. No injury's were reported. 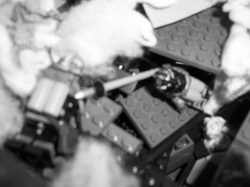 At approximately 17:30 hours. An automatic bow was tripped at 5637 5th ave. Upon arrival ladder 2, and engine 4 made the assumption that the fire was growing.  E-4 requested a 1st alarm be toned. Squad engine 2 was then dispatched along with rescue 4. A crew then entered the building to conduct a secondary search. while doing so the 2nd floor collapsed trapping one firefighter and injuring another. The other fire fighter's SCBA was damaged in the collapse, so the other firefighter (probie at the time) re-established his SCBA line by connecting it to his tank. White ridge RIT/FAST was dispatched to the scene, to help get them out of the building. the other firefighter was found safe in a small void underneath the ruble. 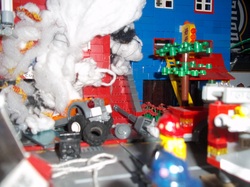 On December 23rd 2012, Dispatch received a request for FD from police units operating on west 4th and 5 ave. Upon arrival Engine 2 found a 2 story brick and wood frame structure on fire. Upon size up the lieutenant found a car had smashed into the front of the building.  A 2nd alarm was toned out. Snorkel 1, Engine 4, Rescue 4 and MedLink EMS unit 2 were dispatched along with Chief 1 and Battalion 1 At approximately 10:06 AM a 4th alarm was toned requesting mutual aid from Dearborn and White Ridge. Dearborn responded with Engine 3, and white ridge with truck 1.